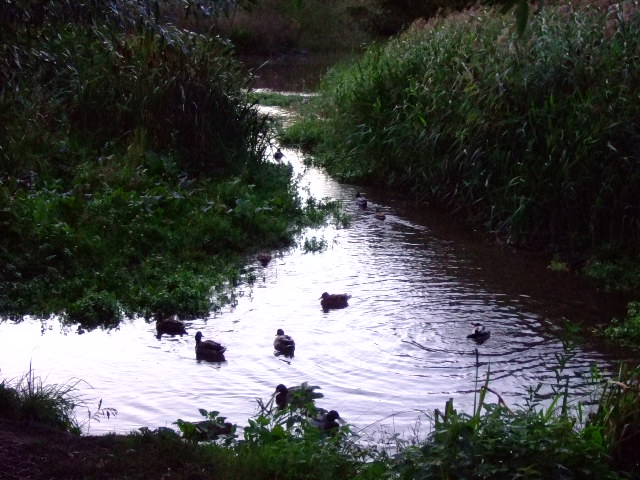 In September 2020,  a brief survey of two sites within the balancing and tributaries were taken. FOSP members spent a morning looking at the biodiversity within the site and a shortlist was compiled. Here are the 2020 results:

Still water by the Dam

River Twyver above Pond below

In the spring of 2021, there will be another chance to have a look at our little oasis again.

So Why is Biodiversity important?

Biodiversity is vanishing from rivers, lakes, and wetlands at an alarming speed. A plan, developed by a global team of scientists from WWT, WWF, International Union for Conservation of Nature (IUCN), Conservation International, the University of Cardiff and other eminent organisations and academic institutions,  is the first comprehensive plan to protect and restore freshwater habitats, which host more species per square kilometre than land or oceans – and are losing this extraordinary biodiversity two or three times faster.   A key element of the 2020 Living Planet Report’s Freshwater Deep Dive, the Recovery Plan gives us a framework from which we can push for greater freshwater representation in the new CBD Post-2020 targets.

Published in BioScience, the Emergency Recovery Plan calls for the world to take urgent steps to tackle the threats that have led the 84% collapse in freshwater biodiversity and the degradation of 90% of the world’s wetlands reported in the 2020 Living Planet Index report – ecosystems that provide us with water, food, livelihoods, and protection from floods, droughts, and storms.

The six-point plan prioritises solutions that are rooted in cutting edge science and have already proven successful in certain locations:

Our newly published Emergency Recovery Plan presents an outline of straightforward and pragmatic solutions to the freshwater biodiversity crisis that are already proven to work. A strategic approach to the implementation of these measures is vital if we are to make a global impact.
Wetlands are natural super systems that sustain an extraordinary level of biodiversity. We must act now to protect them.

Critically, with governments meeting in November to agree on a new global deal to conserve and restore biodiversity at a landmark conference of the Convention on Biological Diversity, the authors recommend some new targets, including on restoring water flows, controlling illegal and unregulated sand mining in rivers, and improving the management of freshwater fisheries that feed hundreds of millions of people.

Nowhere is the biodiversity crisis more acute than in the world’s rivers, lakes and wetlands – with over a quarter of freshwater species now heading for extinction.
The Emergency Recovery Plan can halt this decades-long decline and restore life to our dying freshwater ecosystems, which underpin all of our societies and economies.

Covering approximately 1% of the Earth’s surface, rivers, lakes and freshwater wetlands are home to 10% of all species and more described fish species than in all the world’s oceans. But they are rapidly disappearing with populations of freshwater megafaunas – such as river dolphins, sturgeon, beavers, crocodiles and giant turtles – crashing by 88% in the past half-century.

The Emergency Recovery Plan highlights a variety of measures that together will transform the management and health of rivers, lakes and wetlands, such as treating more than 20% of sewage before it is flushed into nature, avoiding dams on the world’s remaining free-flowing rivers, and expanding and strengthening protected areas in partnership with local communities.

All the solutions in the Emergency Recovery Plan have been tried and tested somewhere in the world: they are realistic, pragmatic and they work.
We are calling on governments, investors, companies and communities to prioritise freshwater biodiversity – often neglected by the conservation and water management worlds. Now is the time to implement these solutions, before it is too late.

“We have the last opportunity to create a world with rivers and lakes that once again teem with wildlife, and with wetlands that are healthy enough to sustain our communities and cities, but only if we stop treating them like sewers and wastelands,” said Tickner. “This decade will be critical for freshwater biodiversity: countries must seize the chance to keep our life support systems running by ensuring freshwater conservation and restoration are central to a New Deal for Nature and People.”

Find out more about the recovery plan here

For peat's and the planet's sake... read this....In the run-up to Christmas and afterwards, the UK and Welsh governments published a consultation on plans to ban retail sales of products containing peat, something Plantlife has long campaigned for.www.plantlife.org.uk/uk/our-work/campaigning-change/why-we-need-to-keep-peat-in-the-ground-and-ou...mailchi.mp/plantlife/plantlife-news-january-2022?e=2abd9710d5 ... See MoreSee Less