A selection of the commonly heard bird songs from around the pond nature reserve, all well-known bird songs, recorded to help you identify the bird calls when visiting the pond. Many of these can be see and heard in your own back garden … 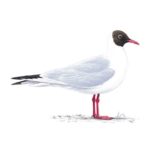 Not really a black-headed bird, more chocolate-brown – in fact, for much of the year, it has a white head. It is most definitely not a ‘seagull’ and is found commonly almost anywhere inland. Black-headed gulls are sociable, quarrelsome, noisy birds, usually seen in small groups or flocks, often gathering into larger parties where there is plenty of food, or when they are roosting. 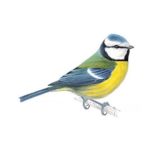 A colourful mix of blue, yellow, white and green makes the blue tit one of our most attractive and most recognisable garden visitors. In winter, family flocks join up with other tits as they search for food. A garden with four or five blue tits at a feeder at any one time may be feeding 20 or more 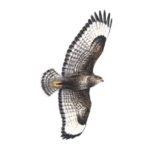 Now the commonest and most widespread UK bird of prey. The buzzard is quite large with broad, rounded wings, and a short neck and tail. When gliding and soaring it will often hold its wings in a shallow ‘V’ and the tail is fanned. Birds are variable in colour from all dark brown to much paler variations, all have dark wingtips and a finely barred tail. Their plaintive mewing call could be mistaken for a cat. 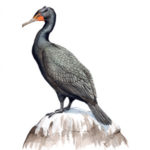 A large and conspicuous waterbird, the cormorant has an almost primitive appearance with its long neck making it appear reptilian. It is often seen standing with its wings held out to dry. Regarded by some as black, sinister and greedy, cormorants are supreme fishers which can bring them into conflict with anglers and they have been persecuted in the past. The UK holds internationally important wintering numbers. 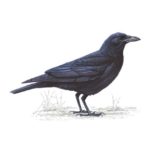 Most crows are adaptable but often shy where persecuted. In towns, some become tame and may visit gardens. They all have strong, scaly feet, and stout (or downcurved) bills, mostly with a small patch of bristly feathers covering the nostrils. Northern populations of some species are migratory or nomadic, others are entirely resident. Eight species breed in the UK, but there are many others around the world. 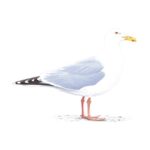 Herring gulls are large, noisy gulls found throughout the year around our coasts and inland around rubbish tips, fields, large reservoirs and lakes, especially during winter. Adults have light grey backs, white under parts, and black wing tips with white ‘mirrors’. Their legs are pink, with webbed feet and they have heavy, slightly hooked bills marked with a red spot. Young birds are mottled brown. 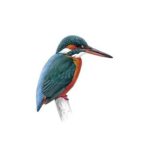 Kingfishers are small unmistakable bright blue and orange birds of slow moving or still water. They fly rapidly, low over water, and hunt fish from riverside perches, occasionally hovering above the water’s surface. They are vulnerable to hard winters and habitat degradation through pollution or unsympathetic management of watercourses. Kingfishers are amber listed because of their unfavourable conservation status in Europe. 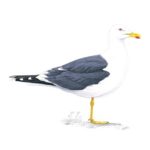 Slightly smaller than a herring gull, the lesser black-backed gull has a dark grey to black back and wings, yellow bill and yellow legs. Their world population is found entirely in Europe. After declines in the 19th century due to persecution they increased their range and numbers. The species is on the Amber List because the UK is home to 40 per cent of the European population and more than half of these are found at fewer than ten sites. 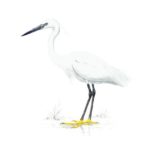 The little egret is a small white heron with attractive white plumes on crest, back and chest, black legs and bill and yellow feet. It first appeared in the UK in significant numbers in 1989 and first bred in Dorset in 1996. Its colonization followed naturally from a range expansion into western and northern France in previous decades. It is now at home on numerous south coast sites, both as a breeding species and as a winter visitor. 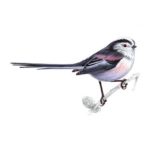 The long-tailed tit is easily recognisable with its distinctive colouring, a tail which is bigger than its body, and undulating flight. Gregarious and noisy residents, long-tailed tits are most usually noticed in small, excitable flocks of about 20 birds. Like most tits, they rove the woods and hedgerows, but are also seen on heaths and commons with suitable bushes. 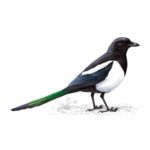 With its noisy chattering, black-and-white plumage and long tail, there is nothing else quite like the magpie in the UK. When seen close-up its black plumage takes on an altogether more colourful hue with a purplish-blue iridescent sheen to the wing feathers and a green gloss to the tail. Magpies seem to be jacks of all trades – scavengers, predators and pest-destroyers, their challenging, almost arrogant attitude has won them few friends. 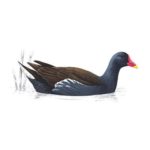 Moorhens are blackish with a red and yellow beak and long, green legs. Seen closer-up, they have a dark brown back and wings and a more bluish-black belly, with white stripes on the flanks. Moorhens — sometimes called marsh hens — are medium-sized water birds that are members of the rail family. Most species are placed in the genus Gallinula, Latin for “little hen”. They are close relatives of coots. They are often referred to as gallinules. 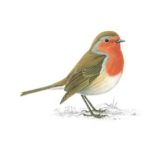 The UK’s favourite bird – with its bright red breast it is familiar throughout the year and especially at Christmas! Males and females look identical, and young birds have no red breast and are spotted with golden brown. Robins sing nearly all year round and despite their cute appearance, they are aggressively territorial and are quick to drive away intruders. They will sing at night next to street lights. 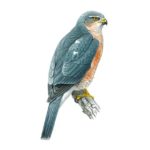 Sparrowhawks are small birds of prey. They’re adapted for hunting birds in confined spaces like dense woodland, so gardens are ideal hunting grounds for them. Adult male sparrowhawks have bluish-grey back and wings and orangey-brown bars on their chest and belly. Females and young birds have brown back and wings, and brown bars underneath. Sparrowhawks have bright yellow or orangey eyes, long, yellow legs and long talons. 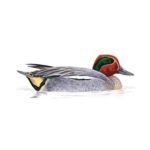 Teals are small dabbling ducks. Males have chestnut coloured heads with broad green eye-patches, a spotted chest, grey flanks and a black edged yellow tail. Females are mottled brown. Both show bright green wing patches (speculum) in flight. They are thinly distributed as a breeding species with a preference for northern moors and mires. In winter, birds congregate in low-lying wetlands in the south and west of the UK. 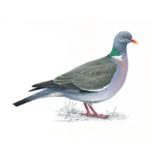 The UK’s largest and commonest pigeon, the woodpigeon is largely grey with a white neck patch and white wing patches, clearly visible in flight. Although shy in the countryside it can be tame and approachable in towns and cities. Its cooing call is a familiar sound in woodlands as is the loud clatter of its wings when it flies away. 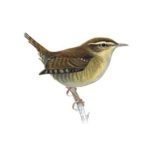 The wren is a tiny brown bird, although it is heavier and not as slim as the even smaller goldcrest. It is dumpy, almost rounded, with a fine bill, quite long legs and toes, very short round wings and a short, narrow tail which is sometimes cocked up vertically. For such a small bird it has a remarkably loud voice. It is the most common UK breeding bird, although it suffers declines during prolonged, severely cold winters. 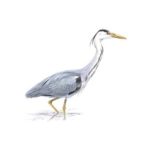 The grey egret is a species of small heron in the family Ardeidae. The genus name comes from the Provençal French Aigrette, “egret”, a diminutive of Aigron,” heron”. The species epithet garzetta is from the Italian name for this bird, garzetta or sgarzetta. Its colonization followed naturally from a range expansion into western and northern France in previous decades. It is now at home on numerous south coast sites, both as a breeding species and as a winter visitor.

With the COVID-19 lockdown, we are not currently doing any work at the nature reserve, but are concentrating on our allotment.
We hope to be back soon, for more information please check out Nextdoor, LinkedIn or Twitter for our latest updates.